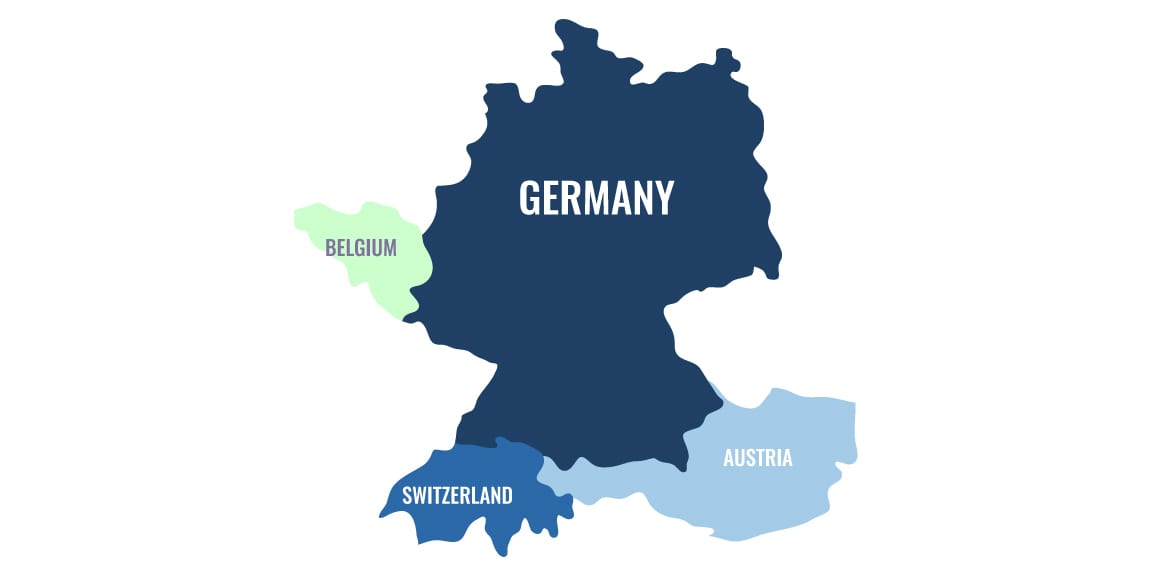 The question that frequently arises that is German the same everywhere? Well, it’s not. People in German-speaking countries proudly talk differently from everyone else. Language differentiates people from one another. Every country has its German dialect, pronunciations, idioms, and even vocabulary; and yet all are German.

What are the German-Speaking Countries?

The question of how many countries speak the German language depends on how we count countries. German is the official language of six countries in Europe, Germany with over 80 million native speakers, and Austria with 8 million German speakers, and Switzerland with 4.6 million while Luxembourg and Liechtenstein have 390,000 and 35,000 German speakers respectively.

Over 16% European Union’s population speaks German. Moreover German is spoken as an official and minority language in Italy, France, Denmark, Russia, Poland, Romania, and some others. It is the approximate distribution of native speakers of the German language in the world.

People outside Europe, such as Namibia, South Africa, and Kazakhstan speak German as well. Besides, it was also brought to the United States, Brazil, Norway, Mexico, and Australia by the German immigrants during the time of immigration, in the early 20th century.

Let’s have a look at the German-speaking countries in detail.

European countries where German is the official national language

German is the official national language in the following European countries:

There are six European beautiful countries where German is the official national language and local co-official language in four countries.

Other European countries where German is not the official language

A lot of European countries where minorities and some ethics committees speak German language but it is not the official language there, it includes:

The German language there is quite interesting as it originates from German regional dialects that were spoken in the 17th and 18th centuries. A recognized minority, around 15 thousand German speakers live in Denmark. You will find German speakers in France as well as in Spain. Over 50,000 people live in Spain who speaks German.

From 1884 to the early 19th century there was a German colony, Namibia from Southwest Africa where people speak German dialect. Around 20,000 people of Namibians from South Africa are still live there. German was spoken as the official language in Namibia until its independence from South Africa.

Though, German is not the official language in any State of America, however, there are still 46 million people in American with German ancestry. German people in America are the largest, with the ancestry group by the US Census Bureau in its American Community Survey.

In the 19th century, German immigrants such as Amish, Mennonite, or Hutterite communities kept their way in the United States. There are pockets of German speakers in Latin America, especially in South America, Argentina, Brazil, Paraguay, and Chile.

Common Dialects of the German Language

All the German-speaking countries speak one of the above-mentioned dialects, according to their territories.

Facts About the German Language

The German language is one of the foreign languages in the world has had a significant impact on other cultures and languages. In the 19th century, the literature of the German language enjoyed a prestigious phase. And a lot of German words including “Kindergarten”, “ wanderlust”, ”delicatessen”, rucksack” and “poltergeist”, exported to other languages.

Today, Germany is leading in the global economy; it is a strong reason that makes people learn the German language. Germany has a strong economy in Europe and the fourth-largest community in the world behind the United States, China, and Japan.

Moreover, German is an important language for those who deal in the automotive, manufacturing, and engineering departments. This is because these industries are the biggest reason for Germany’s strong economy. Besides, qualitative analysis shows that German is known as the language of science and the second most commonly spoken language by the scientist around the world.

German did not appear until the mid of eighteenth century and today it is one of the topmost languages of the world used on the internet; around 6% of websites on the internet are in the German language. A lot of books are written and translated into German dialect. According to researches 10% of all the published and printed books are in German. Moreover Standard German is a popular language taught as a foreign language.

The Goethe Institute is the world’s most important organization for German speakers and learns. It was established in 1951 and today it has over 150 branches all around the world. This institute promotes the language as well as the culture of German including varied education programme.

Here are some of the interesting facts about the German language that will make you learn German instantly:

Now finally you have quite clear about the German and the countries speaking German countries. German is a beautiful language and a lot of people want to learn German because of the strong economy of Germany. If you want to learn the German language, you must learn according to the dialect of the country.