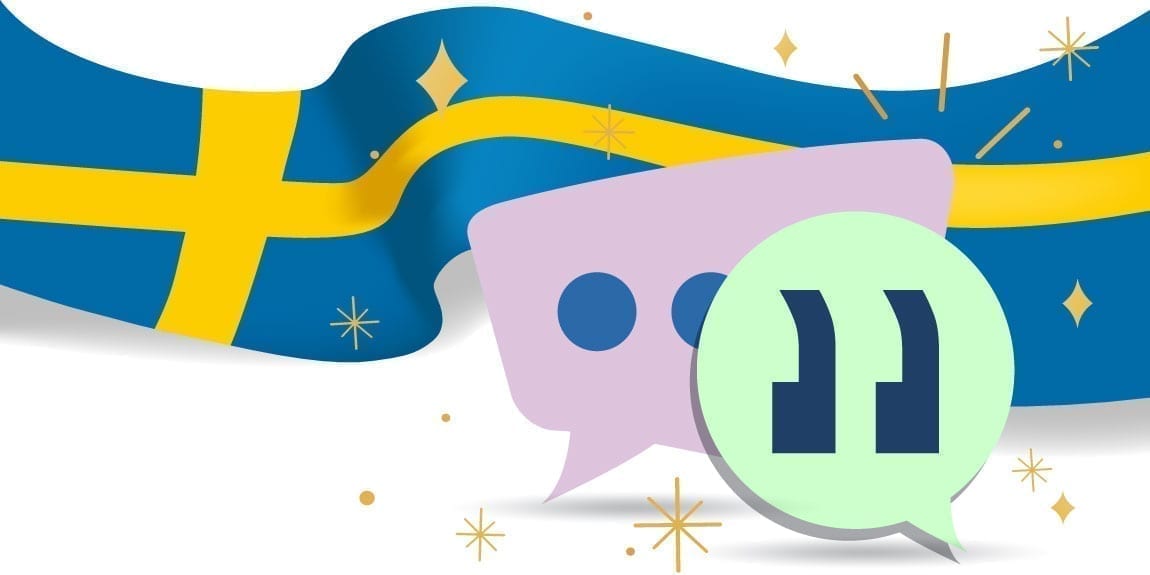 With the right words, you can change anyone’s mind. But it is not simple or easy to find that right words. In fact, sometimes it can be pretty difficult to think of some good words. This is what happens when you are trying to write a birthday card for your friend or a letter to your sibling. But the internet is always there to help you with thousands of quotes for every occasion. When you can’t say something in your own words, you can always rely on famous authors to provide the right sentence for you. But when you are writing to someone who speaks a different language than you, you can’t just rely on Google Translate to get their version of a famous quote. You will have to look for beautiful quotes and phrases in their language. Fortunately, you won’t have to make a trip to the market to find the right quote book for that.

A descendent of the Old Norse, Swedish is one of the most spoken Scandinavian languages. It shares a close connection with Norwegian and Danish and is mutually intelligible with them to some extent. It is the dialects that have developed distinct features over time. Today, Swedish has over ten million native speakers, most of whom live in Sweden. But it is also spoken by a considerable number of people in Finland.

In the last few years, the interest in this tongue has increased considerably. The immigration of refugees to Sweden can be one cause of that. People from different parts of the world have moved to this state, and they want to learn the native tongue so they can adjust easily. Today, it is spoken by over three million people as their second language, but the number of its students is constantly increasing.

What Are Beautiful Swedish Phrases?

Sweden is a peaceful and happy country, which is why linguists expect its language to be just as friendly. But slang words and varieties develop in a unique way, and their tone cannot be predicted. However, like all other vernaculars, there are plenty of beautiful and sweet words and phrases in Swedish too. Here are a few of them that you can use in letters or as social media posts:

This is the sentence that people search the most for on the internet. Whenever someone wants to express their love in the native language of their beloved, they look up the phrase I love you in that vernacular. In Sweden, people use the words mentioned above to express feelings of love. However, this sentence is only reserved for romantic feelings. If you wish to tell a friend or sibling that you love them, you can use ‘jag gillar dig’ instead.

Nothing can make people happier than hearing praise from others. It could be something simple as this phrase, which translates to ‘I think you are lovely,’ and it will still put a smile on the face of the person you are talking to. So, if you want to make someone blush, try this Swedish phrase.

Regardless of the country and time zone you are in; it will never be wrong to ask for ice cream. This Swedish phrase translates to ‘I feel like ice cream,’ but it really means ‘I am craving ice cream.’ The word sugen in Sweden is used whenever someone is craving something. There are also compound words made up of sugen like kaffesugen when you are craving coffee.

The Swedes prefer to stay silent to avoid conflict instead of taking part in debates. The phrase mentioned above translates to ‘I prefer not to say anything about this’ is often said when the speaker has an opinion on a matter but decides not to say it to avoid conflict.

A pretty common word in Sweden is Lagom. If you visit the country, you will hear it everywhere during conversations. The word does not exist in any other tongue, which is why there is no exact meaning of it. However, it translates to ‘not too little and not too much, just right.’ It can be used to talk about how much food or drink someone wants.

Who hasn’t wanted a second cup of tea or coffee on a cold winter evening? But the Swedes have come up with a word to help people avoid the embarrassment of saying that they want more tea. A unique word, Påtår, means to pour a second cup.

Due to the cold weather, they have to endure, the Swedes have made up a word to describe the time of the year when the cold gets unbearable. The word refers to the months of January and February when the country gets covered in snow.

Learning new phrases and words in a language can be pretty interesting. But if you have a friend who speaks that language that all your efforts will be worth the smile your messages will bring to their face. In the world of the internet, the speakers of different tongues can easily engage in conversations, but it is the extra effort to get to know someone and their culture that counts. It is also good for our minds to study different vernaculars. It helps us understand different cultures in a better way.