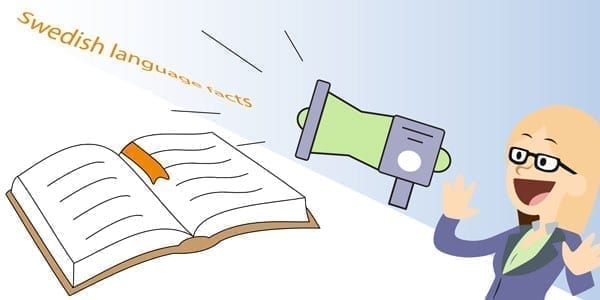 There are quite a few interesting Swedish language facts some of our linguists were discussing at our Birmingham translation office in the last days and we thought those would make an interesting 6 minutes read for our visitors.

The Kingdom of Sweden has about nine million people who speak Swedish as their first language. As an official language, Swedish is used in Finland. About a half a million ethnic Swedes use Swedish in the US.

There are a number of dialects of the Swedish language. Because of their diversity, some are even considered as separate languages.

These are some of the Swedish dialects

Westrobothnian is a term used for languages closely related to Germanic and North Germanic languages ​​spoken in the former Westrobothnia. Bordering areas were with speakers of Meänkeli Finnish to the north, Jamtlandic at south-west, Sami to the west and dialects of national standard Swedish to the south. The forms of Westrobothnian dialects are derived from the Old Norse, Proto-Norse, Viking era which developed as a different language. Piteå, Skellefteå, Umeå, Luleå and Kalix are villages that have a population that speaks Westrobothnian. Among the various areas there are many dialects.

In the dialect group Dalecarlian even speakers of different sub-dialects can not understand each other. This group of dialects is commonly spoken in the Älvdalen municipality that has a population of 1,500 inhabitants in the northern parts of the province of Dalarna.

Modern Gutnish is a language spoken in Gotland and Faro. Today there is a question regarding whether it is a distinct language of its own, or a dialect of Scandinavian. It originates from the Old Gutnish as a separate branch of the Nordic language family.

Jamtlandic is the commonly spoken dialect in the province of Jamtland. It has its own 30,000 native speakers, as well as speakers from other parts of Sweden. Jamtlandic or Jamska has 95% lexical similarity with Swedish and Norwegian and is a West Scandinavian language.

In the Swedish province of Scania, which was until 1658 part of the Kingdom of Denmark, they speak Scanian or Swedish Skåne. According to some, it is considered a dialect of Denmark. They speak this dialect in Bornholm, where it is called East Danish, but today the dialect is much influenced by the Swedish standard.

The Minority Language Committee of Sweden in 1999 formally declared five minority languages ​​in Sweden. They are: Finnish, Meänkieli (also known as Tornedal, Tornionlaaksonsuomi), Romani, Yiddish and the Sami languages.

In southern Sweden today, there are about 470,000 Finnish-speakers. The Finnish language is a Uralic language and has long been spoken in Sweden. It is logical because Finland was part of the Swedish kingdom for centuries. Almost 5% of the population is ethnic Finns in Sweden, and the largest concentration of about 16,000 Finnish speakers is in Norrbotten.

Also, another worth noting dialect of the Finnish language is Meänkieli. It is considered a dialect of Finnish and is actively spoken by the Tornedalian people. Meänkieli is used as a first language mainly in the municipalities located in the valley of Torne, such as Gällivare, Haparanda, Kiruna, Pajala and Övertorneå, and is spoken by between 40,000 and 70,000 people.

The Sami languages ​​are spoken by Sami people indigenous to northern Scandinavia. They speak among themselves a close-knit group of languages ​​under the name “Sami”. There are at least 3 separate Sami languages ​​spoken in Sweden. They are like Finnish and Meänkieli, Uralic. In Sweden today, there live between 15,000 and 20,000 Sami people. Of these, 9,000 are Sami-language speakers.

Yiddish is a Germanic language with significant Hebrew and Slavic influence. Immigrants brought the Yiddish language to Sweden after the 18th century. Today it is estimated that about 20,000 Jews still live in Sweden, of which 2,000 to 6,000 people have knowledge of the Yiddish language.

As an officially recognized minority language in Sweden is Swedish Sign Language.

But that is not all. Among the interesting Swedish language facts an important spot is taken by the foreign languages spoken in Sweden.

Germany until the end of the Second World War established the closest political, trade and cultural relations with Sweden. The Swedish state made the promotion of German as the main foreign language in Sweden. Even the educational system in Sweden was organized according to the German and Prussian model. Much of the Swedish intellectuals were educated at German universities. But over time because of trade ties and greater opportunity to travel, many Swedes were under strong American influence in terms of tradition, art and culture. English, in 1849, slowly replaced the German language and became mandatory to be studied in schools. Currently it is still a compulsory subject from the third to ninth grade and Swedish students in secondary schools have to study English for at least another year. Today most students study an additional language. The most popular languages are Spanish, French and German.

This concludes our discussion about the Swedish language facts. If you know any other interesting facts feel free to let us know in the comments.

Languages are full of surprises. It’s because they didn’t form overnight. Languages are the amalgamation of cultures, lifestyles and sometimes even accidents. Swedish is also one such language. There are plenty of Swedish Language Facts but the fun facts will blow your mind for sure.

For starters, Did you know that Sweden has a Kingdom? chances are, you do, but you sure didn’t know that the word “SWEDEN” means Kingdom itself.
Now come to the language, if as a child you learnt from your parents to say please before asking anything to anyone, this one will literally amaze you.

If you ever learn to speak Swedish, you’ll most likely understand Danish and Norwegian. This is because Sweden is geographically close to both Norway and Denmark and the languages are pretty similar. So that’s definitely a three in one if you start a Swedish language course.

Sweden, Norwegian, and Denmark are close geographically, and their languages are similar, aswell. Swedish differentiates between your grandfather on your mother’s and your father’s side. Your father’s father is your farfar, which translates to “father father.” Your mother’s father is morfar, which means “mother father.” Of course, the same rule implements for grandmothers, too. More words in Swedish begin with “S” than any other letter. Like English, very fewer words start with “Q” and “X,” which is good to know if you’re thinking about testing your Swedish friends to a game of Scrabble. Many Swedish words formed it into the English language. Examples of Swedish loanwords carry gravlax (a Nordic dish), moped (composed of motor” and “pedal,” this word applies to a motorcycle), ombudsman (a public advocate), orienteering (sports using navigational abilities), rutabaga (a root vegetable). According to the Swedish Academy, Swedish’s longest word is realisationsvinstbeskattning. It means “capital gains tax.”