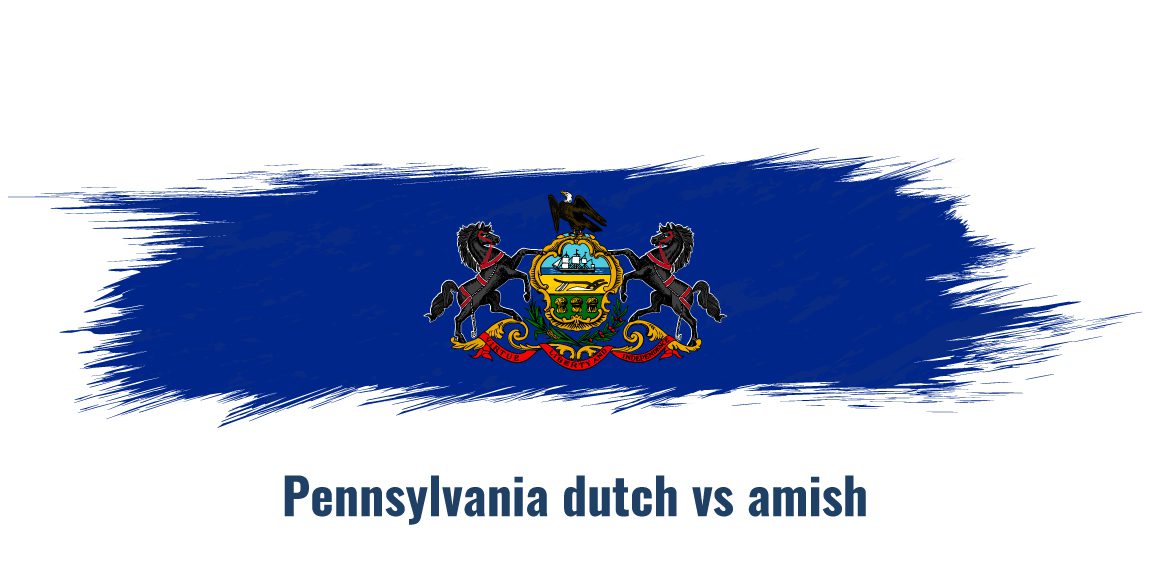 Well, in case you may be curious to know what is the line of differences between this two important languages, here’s what you need to know about the difference between Pennsylvania Dutch and Amish.

An Historical Perspective of Pennsylvania Dutch vs Amish

The Amish culture is based on the Germanic tradition of Anabaptism, which stresses simplicity, pacifism, and community. The Amish population is concentrated in southeastern Pennsylvania, particularly in Lancaster County.

There are also Amish communities in Ohio, Indiana, and other parts of the United States. They’re spread out all over the country. Pennsylvania Dutch Country, for example, stretches all across Pennsylvania with plenty of rolling hills and farmland to go around. In Franklin County, there are more than 2,000 members of the Pennsylvania Dutch population.

Berks County has an even larger number at nearly 9,000 people speaking the dialect. In terms of social customs and traditions, both groups have them; they just vary in some aspects like religion or dress codes.

For instance, while the Amish wear plain clothing without buttons or zippers as a sign of humility before God and as an emblematic statement against worldly vanity (they can get dressed quite quickly!), traditionally dressed Pennsylvania Dutch folk tend to favor bright colors like reds and greens—a nod to their European roots.

Amish country is a historic region in Pennsylvania that is home to a large community of Amish people. The Amish are a conservative Christian group who live simple lifestyles, shunning modern technology and creature comforts. The world around them has changed but they have remained steadfastly true to their beliefs and traditions.

Amish families speak English or German at home depending on where they live but use Dutch when conducting business with other Amish people. Children usually learn English as a second language starting around age five or six.

Adults usually know both languages well since they grow up hearing it at church, school, and during family gatherings. Get the important information about Why translate English to dutch for business needs?

There are many differences between the Pennsylvania Dutch and the Amish including dress code, education, food production practices, religious views, social practices like technology use, etc., but the main difference is found in how each group approaches change-whether it be accepting new innovations or resisting progress.

For example, the Amish have resisted changes brought by society such as electricity, telephones, automobiles and television for centuries. They still rely primarily on horses for transportation which is why you will often see tourists zipping through buggy lanes all over Lancaster County.

Another example would be the Pennsylvania Dutch population in Berks County-the most populous rural county in Pennsylvania. As you might expect from its name, this population speaks mostly Dutch rather than English although some Pennsylvanians of Dutch descent also speak English (like me).

A good number of Dutch Americans were born here before 1980 so it’s possible for these two populations to mingle in Berks County without much difficulty.

The Amish are a sect of Christianity that follows Anabaptist teachings. They originally came from Switzerland and southern Germany. Both groups settled in southeastern Pennsylvania in the early 18th century.

Pennsylvania Dutch people began to settle there when William Penn invited them to come to America as part of his holy experiment for religious tolerance.

As for the Amish, they settled in Lancaster County because it was close to Philadelphia, where they could trade their goods without paying taxes. The difference with these two settlements was that the Germans did not speak English and were not eager to assimilate into mainstream culture.

Whereas, even though they spoke different languages, Dutch people mixed with English people and spoke their language while retaining aspects of their own culture such as food and clothing styles

Other distinguishing differences between Pennsylvania Dutch vs Amish

Is English spoken widely in Sweden?

Although English is not an official language of Sweden, it is widely spoken throughout the country. According to a 2012 study by the European Commission, about 85% of Swedes reported being able to hold a conversation in English. The Swedish government does not require its citizens to learn any other languages besides Swedish for compulsory education. As such, there are no quotas for teaching English or other languages in schools.

However, the Svenska för invandrare (Swedish for Immigrants given by Swedish Speakers) program provides free classes on Swedish and life skills for refugees and asylum seekers.

The vast majority of people can speak fluent English; however, few can read or write it.

What are the top 3 languages spoken in Sweden?

Sweden is a culturally diverse country, and as such, there are a number of languages spoken within its borders. The three most common languages spoken in Sweden are Swedish, Finnish, and Sami. English is also commonly spoken among Swedes due to the fact that English classes are mandatory for all Swedish students.

What language is mainly spoken in Sweden?

The main language spoken in Sweden is Swedish. However, there are also several minority languages spoken in the country, including Finnish, Sami, Romani, Yiddish, and Meänkieli. For example, English is taught as a mandatory subject from the 7th grade of primary school up to 10th grade of secondary school, which means that around 20% of Swedes have some level of fluency in English.

What are the top 2 languages spoken in Sweden?

According to Ethnologue, two languages are spoken in Sweden: Swedish (Standard Language and has official status) and Finnish. Swedish is the official language of Sweden, while Finnish is one of the two official languages of Finland. Swedish is also one of the two main languages spoken in Finland, along with Finnish. There are a total of 9 million speakers of Swedish, including 8.9 million in Sweden and 0.5 million in Finland. The Finnish language is closely related to Estonian, and both are part of the Finnic branch of the Uralic language family. Finnish is mainly spoken in Finland, but there are also a significant number of Finnish speakers in Estonia, Norway, Russia, and Sweden.