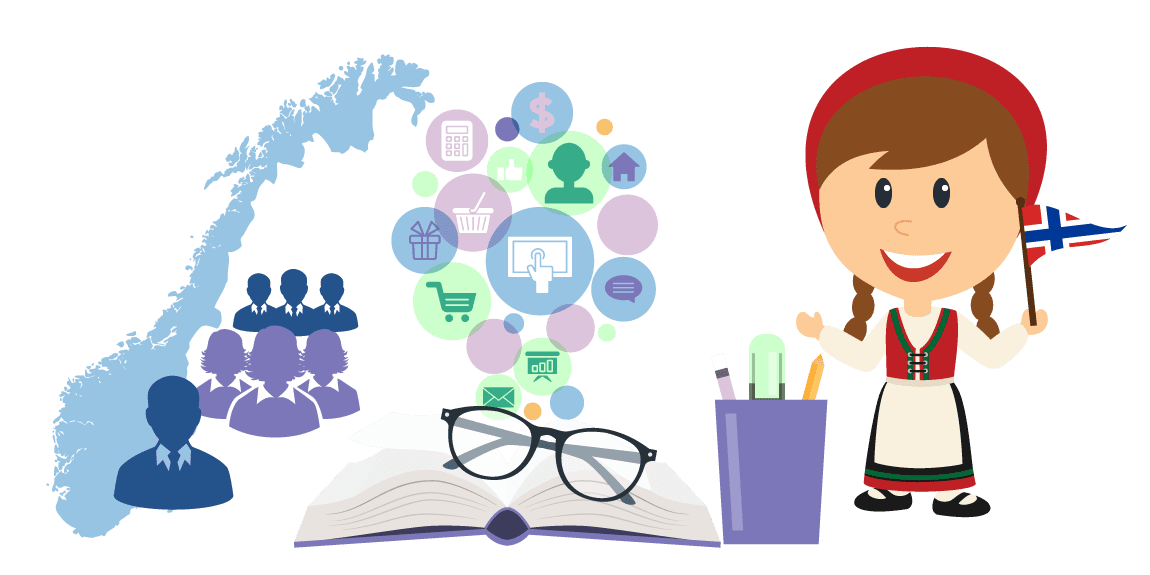 What makes Norwegian such a difficult language to learn? Why learn Norwegian?

Learning a language can be a daunting task for the inexperienced linguist, but patience and hard work will get you there. There could be quite some challenges if you want to learn Norwegian, but while it won’t be easy, it’s not impossible either.

As there are over a thousand spoken languages, and even double that figure for writing, language can be a barrier for expanding business operations in the global market.

Language translation has ushered in an era of market localization that enables businesses to maximize profit opportunity. It has opened up multifarious opportunities for businesses and individuals to conduct business outside of their bailiwick, and sometimes in the uncharted market which may be a pot of gold for profit.

Why should you learn Norwegian?

Norwegian is a medium-difficult language, it is not as easy as Spanish, Danish or Swedish but not as hard as Japanese or Latin. The grammar is fairly easy (though memorizing the gender of the nouns is a pain because we use masculine, feminine, and neuter), but the main trouble is in the pronunciation and vocabulary. Several Norwegian words represent dissimilar things with little different accents, even the spelling is same or only a little different.

There are, however, languages that are just too difficult to learn and need extra effort. Norwegian must certainly be excluded from this list. Uncommon for some countries, Norway actually has two official languages Bokmal and Nynorsk. A distinguished language professor from Russia remarked that Norwegian is one of the most difficult languages to speak. He has been grappling with the language, trying to perfect it for the past few decades, and has even written the Russian-Norwegian dictionary and its accompanying Norwegian-Russian dictionary. He has also spent more than four decades teaching Norwegian language (among other languages he knows). Furthermore, this professor noted that there are various forms of Norwegian from which the challenge lies, especially for non-Norwegians to learn Norwegian.

One reason is that the tonelag that which is the inflection and almost musical accent of a language is quite not easy to master, especially for non-Norwegian speakers. It is essentially the pronunciation that makes it not easy to learn. What makes this language learning even complex is that the vocabulary, grammar,  and structure vary so much because of several dialects in Norway. And Norway is composed of innumerable dialects scattered all over its regions. There are just a lot of local dialects in the country and words may sound different from another dialect. The word “I”, for instance, may denote varying pronunciation as in jeg, je, eg, æ, i, e depending on which location you may be in, and which uses a different kind of dialect. It can get very confusing if you are a tourist, with no formal training of the Norwegian language, visiting the country for the first time.

Online courses are available on Danish, Italian, Nynorsk, this language exchange can be learned in important ways. Book language for certain languages is easy to learn. Gobal language exchange demands the languages such as Scandinavian languages, Norwegian languages to be learned. Elementary level course book has a multicultural nation exciting expeditions through which foreign language can be learned easily. Many universities such as the University of Edinburgh, the University of Oslo, Sweden, Scotland, Antarctic, Norway and many provide free online exercise language can be learned easily. You can learn Norwegian Online hrs per week to polish your Norwegian. Many people across the north have classes for Norwegian for beginners. The course book for Norwegian for beginners is very helpful for people. Norwegian course is an internationally known course book with excellently Norwegian Grammar explained. Norwegian films also help people in exploring Norwegian Grammar. The world is evolving and people are learning Norwegian culture as well as Norsk Grammatikk. It is a wonderful place and written Norwegian is more wonderful. Therefore. Norwegian course by spoken Norwegian speakers is always in demand.

Another factor why it is a feat to learn Norwegian language is the unintuitive phonetics it has in juxtaposition with the English language. Words suddenly turn a different form in Norwegian, like how chicken becomes kylling. These are the sort of challenges that make Norwegian a heavy language to learn for non-Norwegian speakers.

There are, however, some similarities between Norwegian and English languages in terms of origin and structure. However, in essence, these words do not mean the same as in their English “counterparts”. As such, this may be a source of confusion as the speaker (who may be adept with the English language) can interchange words and use it incorrectly. Meanwhile, it is interesting to note that while non-Norwegian speakers who are fluent in English can have all sorts of trouble learning Norwegian, Norway people, on the other hand, are excellent speakers of the English language. They know word order and learn the country language faster. Free online exercise and elementary level coursebook are also very important in this regard. People from Europe with Norwegian as a second language cannot speak it as better as natives. Written language and tv series can really help people learn different terms of languages.There are many online courses available that teach you different language skills and do interactive Grammar exercises per week included or hrs per week. Norwegian University of Science and technology also give online courses for Norsk Grammatikk. Norway is a wonderful place in the world and spoken Norwegian is more beautiful. Your career with written Norwegian can have an important fact.

There are many important ways that American, Arabic, and many people from a specific language groups can learn the special words of Norwegian. There are many ultimate guides in the world present with a special affinity that people can learn dominant languages in the world. Language studies can also be learned from native speakers or audio files. The lessons notes with personalized program and elementary level course can help you have a better grasp of the foreign language. They are given worldwide per week included or hrs per week. Norwegian University of Science and technology also provides online learning coursebooks hrs per week. Lecturer in Scandinavian also helps across the north sea in interactive exercises of languages. Standard language and democratic language all belong to different language groups. The interactive exercises of the original language in online courses can also help per week included. You can learn the best languages as Norwegian for beginners can be bit tough. Multicultural nations has elementary level coursebook from which people can learn French, Swedish, Norwegian and Germanic languages. People can teach better when it’s their own spoken language, some learn from Tv series and some learn a foreign language from written language.

Added to this hindrance of learning Norwegian is a compendium of unusually long words that vary per area, per dialect. Also, verb conjugation and form shift differently per dialect. It does get very confusing at most times.

Learning a new language is certainly not easy. It can get more complicated if that language happens to be Norwegian. If you give yourself some time, though, say six months, you can surely be as fluent as any other native speaker with undetected brogue and twang from your own native tongue.

Culture relativity is something that can give you the true picture of what’s the country and the people living there are all about. Germanic languages, Norwegian written languages can be learned through elementary level course from the start.  Although learning a new language is not an easy task but even if you master it, you still can’t speak it fluently without knowing the usages, terminologies and cultural ideas. Language learning is a crucial role but can be learned. In languages, there are some feminine nouns, verbs, and terminologies to lean. There are many outstanding women explorers and they learn such languages from free online exercises. For instance, there are words that can’t be taken in their literal meaning, such as you know that apple of one’s eye doesn’t mean an apple in the eye of course. But that’s because you understand the usage and the proverbial meaning of the text. Similarly, the Norwegian language may also have terms that could mean very differently in daily talk. You can only understand the usage if you read the people and their conversations closely.