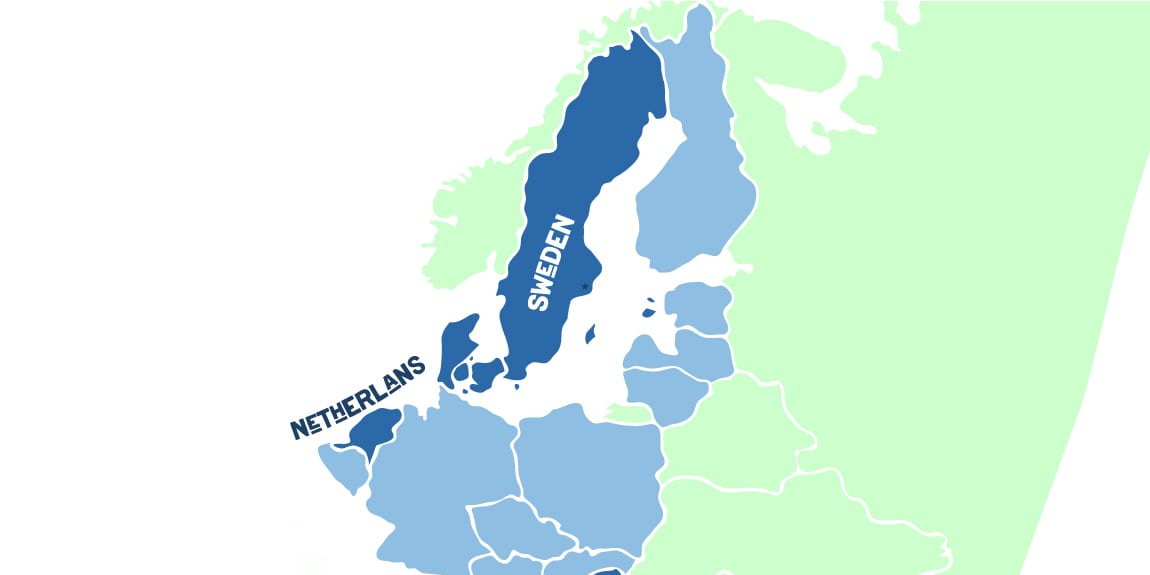 But despite these similarities, Netherlands is still different in several ways. If you are moving to Sweden, then you should have complete know-how about the living conditions of the country. Considering the similarities between both, it is tempting to think that Netherlands and Sweden are interchangeable. But some researchers deny this fact. To know the reality, let’s explore the Sweden part of the Netherlands thoroughly!

The Netherlands which is also known as Holland in other languages is a part of European countries. However, Holland is also named for the two nations out of the 12 which are South and North Holland. Then, in 2020 the Dutch government announced that the country will only be advertised under the name of ‘ the Netherlands’. The kingdom of the Netherland consists of four constituents The Netherlands, Aruba, Curacao, and Sint Maarten.

The Netherlands has the highest population density in Europe. The Dutch invented the first stock market in the world. The Netherlands has a close connection with water. It has over 450 km of coastline bordering the North Sea. 26% of the Netherlands lies below sea level. Major Dutch cities have an issue with supply and demand for housing, which is quite expensive. Northern Europe has three countries constituting the Scandinavian Peninsula.

The Netherlands is located in North-Western Europe, West and North-West coastline the North Sea, borders with Belgium from the South and Germany from the East and Northeast. The land borders are with Belgium and Germany. According to the Central Bureau of Statistics, the total area of the Netherlands is 41526 square kilometers and the large part of the Netherland is covered with water i.e., 7643 square kilometers out of the total area.

The Netherland is geographically very low in comparison to seal level and hence is a flat country. This is the reason that the chances of floods and sea storms are high in this region. There are many major floods and sea storms in the history of the Netherland. Most of the country is in the three major rivers like the Rhine (Rijn), the Meuse (Maas), and the Scheldt (Schelte). Almost the entire West Netherlands is covered by the Rhine and Meuse rivers.

What Is the Difference Between Scandinavia and The Nordics?

There are many conflicts in English between Scandinavia and Nordic countries. The major difference between the two of them is that Scandinavia consists of two countries that constitute the majority of the Scandinavia Peninsula and Denmark. On the other hand, the Nordic country is referred to the five countries including their associated territories which are Denmark, Norway, Sweden, Finland, and Iceland.

Scandinavia further consists of more than 400 islands and the majority of the Jutland Peninsula. Although Finland shares the base of the Scandinavian Peninsula with Norway and Sweden it is not a Scandinavian country. Finland is also not on the list because many behavioral traits, the Finnish language, and much of the Finnish cultural heritage differ from those of the relatively homogeneous Scandinavian countries. Checkout our latest post about What Countries Make Up Scandinavia?

But when speaking of a Nordic country, one is talking more often about Finland, Iceland, Norway, Denmark, Sweden, and the Faroe Islands. By most common definitions both Svalbard and Greenland are classified as outside both Scandinavia and the Nordic country.

This shared identity ‘Nordics’ has led to several alliances, treaties, and alliances for over centuries which has strengthened the region’s identity and helped it to compete against more populous countries in neighboring regions. The Nordic country has a population of more than 5 million residents who are living with the highest standards, not only in Europe but in the whole world as well.

Work Culture in Sweden and Netherlands

The work culture is very deviant in the society of Sweden and the Netherlands. Each city offers a bunch of job opportunities for the workers. In European countries, it is very important to work by following the work culture of the society. For any person who is moving abroad to earn for his family life, he/she should first do proper research about the job opportunities from the country.

In Dutch society, there are a handful of recruitment agencies that have the aim of hiring international workers only if they meet the society’s credentials. The increasing importance to the agriculture and food, creative industries, chemicals, energy, IT, health and life sciences, logistics, and the service industry provides opportunities for people.

In Sweden, the correct society provides a list of jobs in English to see if any international worker can do it. Swedish Migration Agency and the Public Employment Agency have a relatively up-to-date list of occupations that are in high demand.

Furthermore, since the official language of the Netherlands is Dutch, various projects are introducing to give value to the Dutch systems for over centuries. There are many European countries where the Dutch rail network elongates to a 3,010 rather dense km route. The Dutch society is dominant because of three families of political parties; the strongest family is the one from the Christian Democrats.

Christian Democratic Appeal currently represents this family. Moreover, the Dutch royal family is traditionally in link with Calvinism. When the Dutch royal family was established in 1815, a large portion of their wealth came from the Colonial trade. The country has a work-family conflict that is interrupting the correct society credentials which can further cause life conflict.

The official language of Sweden is Swedish and that of the Netherlands is Dutch. Both of the languages are quite similar because both of them have Germanic roots. However, many characteristics make both languages different. Dutch is more close to English. Geographically, Sweden is one of the largest countries in Europe and is 10 times bigger than the Netherlands.