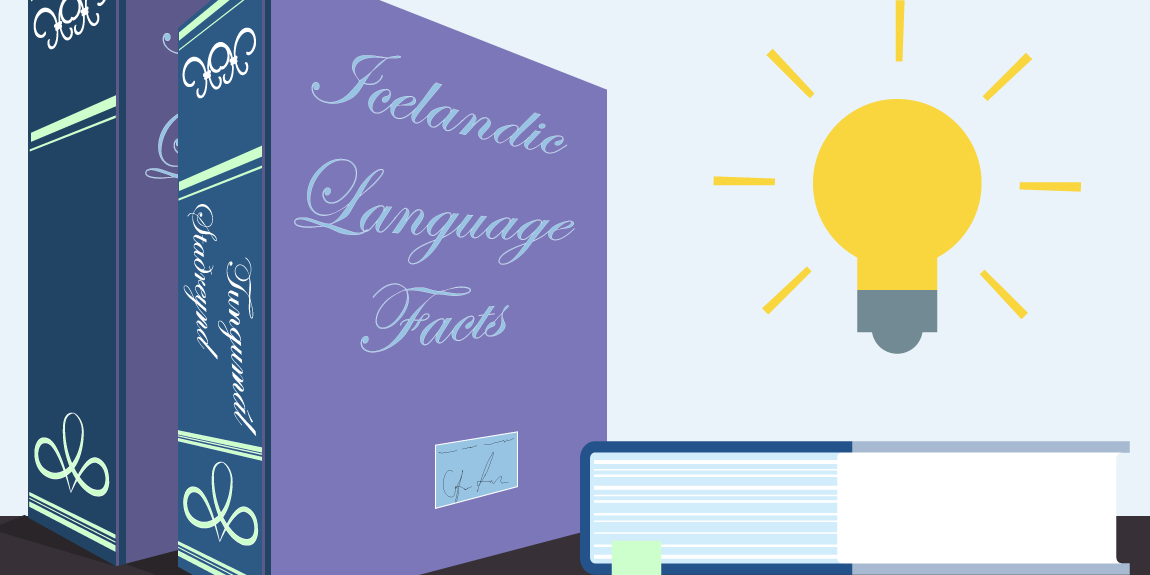 Here are some quick facts about the Icelandic language origin and history. Currently 350,000 people speak Icelandic in the world. Of these, 323,000 people live in Iceland. As the world’s population currently stands at 7 billion people, it means that 0.005% speak Icelandic. This is a fact which is important for linguists who are more interested in the history of Iceland and its native language.

The secret of the Icelandic language origin that has sustained so Long?

External influences have an increasing impact on a large number of languages. This happens mostly because there is a growing lack of cultural interest. This is not the case with the Icelandic language which despite impacts from the middle Ages, remains intact and continues to be spoken even today.

The Icelandic is considered to be an Indo-European language that belongs to a subgroup of the North Germanic languages. This group includes five other languages ​​including Norwegian, Faroese, Norn, an extinct language ​​and Greenlandic Norse.  The Icelandic language is most closely related to Norwegian and Faroese and is almost the same with the Old Norse and medieval language as a dialect.

Due to great efforts to keep the authenticity of the Icelandic language origin through time, it is considered part of the country’s national identity.

Iceland’s history begins with the arrival of Viking explorers, mainly from Norway in the 9th century. Although the Icelandic prevailed, it absorbed many features of the Gall language. Because of the trade, other languages were introduced and are used ​​in Iceland, such as German, English, Dutch, French and Basque. In the 18th century during the Danish rule, there was a serious threat and pressure on the language that continues today.

Listening to the Icelandic language is like traveling through time. It represents a true format of the language spoken in Iceland during the middle Ages and has not changed over time. Indeed, although Iceland is a small and sparsely populated country, the same dialect has been spoken for many centuries. The language has been retained over the years to such an extent, that even 12 centuries old text can be read by modern speakers.

Icelandic remains the closest living relative of the Faroe language with Norwegian, and is now known as a group of West Scandinavian languages.

In the 16th century, although there has been a great influence of foreign words, especially Danish, they invested some serious efforts to keep the authenticity of the Icelandic language origin. At that time, the term Íslenska was created for the first time to describe the native language of this country.

Eggert Olafsson (1726-1768) is an Icelandic researcher and writer and a passionate lover of culture and language of his country. He wrote the first spelling and vocabulary of the Icelandic language. Because of his commitment, the lærdómslistafélag Íslenska (Iceland Art Learning Society) was established. 11 years after his death, the grammar of Iceland is written by the Danish linguist Rasmus Rask and in the 19th century by four intellectuals from Iceland and it is published a Fjölnir magazine.

The fact that the authenticity of the Icelandic language origin has been retained from the past shows the need for linguists from Iceland to invent a word for “computer”. It is commendable that they nurture their ancient roots, but today in modern conversation a lot of new words and phrases are used, unlike in the Middle Ages. For this purpose, there were two options for Icelanders, either to develop their own words or to adopt foreign words. Icelanders chose creativity by reviving old words that were modernized. But the problem, for example with the word “computer” that did not exist in the Middle Ages, and it was solved with the invention of a new word, ‘tölva’. The word is actually a hybrid between völva (witch) and Tala (number). So, the mot-a-mot definition of computer in Iceland is ‘witch numbers’!

Icelandic – a survivor among few others

The Icelandic language has survived for so long without the influence of foreign languages, that it shows the importance of language for the overall identity of a small country such as Iceland.

Besides English, Danish is also required for learning in education; however priority is given to the Icelandic language in schools. Danish is studied because of the ties that Iceland has throughout its history with Denmark, and English as the main international language.

An interesting fact of the Icelandic language origin is that most Icelanders don’t have surnames. As the identification of the family line, parents’ names are used as a basis for the surname of the child. Reference to the father is the most common form of naming tradition used in Iceland. Because of gender equality today, some children are named after their mother. Another difference with the Western tradition is that after getting married, there is a merging of the names of spouses. Icelanders retain their original names. Therefore, Icelanders do not name their children immediately. They wait some time to see how the child’s personality develops, but in the meanwhile they call the child Stúlka if it is a girl, or if it is a boy Drengur. When the moment comes to choose a name, parents are required stick to the legally approved list of first and middle names that can be used. There are more than 1,800 options for girls and 1,700 for boys. If parents have a different desire, they need to send a request to the Icelandic Naming Committee to get approval if that name can be incorporated into the language. This is just another example of their commitment in terms of the maintenance and preservation of the Icelandic language.

Icelandic language origin is often linked to the arrivals of Vikings yet the documents that contained Icelandic dates back to the earliest 12th century, this is because it was circulated and preserved through songs, poetry and stories before.  Among all other Germanic languages, Icelandic is considered to be the most ancient one and in comparison with other languages, it hasn’t evolved as much, perhaps this is the very reason why Icelandic people can still the most difficult ancient texts without difficulty.

Icelandic is also very famous for another fun thing, it may not use or blend words from other languages like English, but speakers do make up new words often, and this trend has been in practice since the past three centuries. Interesting, isn’t it?

There are Icelandic language societies in North America. They came into existence because of migration from Iceland to Canada and the United States in the last part of the nineteenth and the starting of the twentieth centuries.