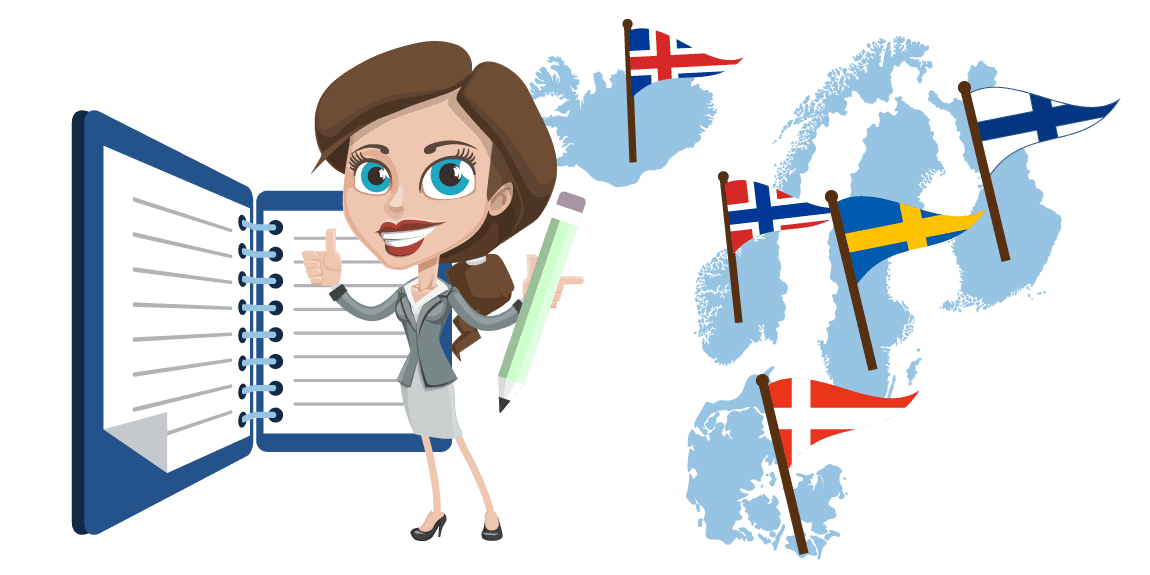 Several centuries ago, many people living in Northern Central Europe spoke a language that varies from the Indo-European cluster. This language eventually evolved to become the West Germanic branch from which Dutch and English languages originated from. The West Germanic branch is what is now commonly known as Scandinavian or Nordic languages. So, here are some long Scandinavian words and their translation.

The Nordic languages have the longest words?

This long history of a language spells a long list of language evolution with an astounding accumulation of vocabulary and nomenclatures. Much is said about the etymology of Scandinavian words; perhaps what is even more interesting is the enormous compilation of unusually long Scandinavian words. When used, such words make up to a hard Scandinavian translation job.

Take for instance Norwegian. Norwegian is regarded as one of the most difficult languages to be learned and has many valid words. In addition, Norway is among only a few countries to have two national languages – Nynorsk and Bokmal. Some of these long words in the Norwegian language may even be more challenging to pronounce with the varying and difficult tone associated with this language. One example is menneskerettighetsorganisasjonene. It is used regularly among Norwegian people, and means “the human rights organizations” in grammatical case. It is very clever indeed because you may need to review your rights when it becomes too complex to read words dative singular form such as this one. It is the longest usual word in Norwegian that is a real word in ordinary use as a cased text. with the original meaning.

Minoritetsladningsbærerdiffusjonskoeffisientmålingsapparatur is another long letter word starting with capital letter in Norwegian. Although it is not used very often, but it includes in existing words, this means “a tool for gauging the distance of particles in a crystal”, and is a whopping 60-character word.Some Noweigian and many compound words are long in oxford dictionaries holding world records.

There are a lot of other Norwegian long words that are being used more often and are hard to translate by a beginner translator, that is why NordicTrans only uses native, specialist translators for Scandinavian translation.

Danish and Swedish languages also have their own list of extremely longest word arbitrary length Scandinavian words. Speciallægepraksisplanlægningsstabiliseringsperiode is composed of 51 letter words with a capital letter and is regarded as the longest Danish word to be used in a written document in existing words. Its arbitrary length with citation needed has meaning in modern English. Oxford dictionaries have old English, Spanish, greek, northern England language, Russian, Norman single word, french in it. It has been used in an official context during negotiations with the local government and it means “Period of plan stabilizing for a specialist doctor’s practice,”.

Perhaps the longest Danish word is multiplikationsudregningstabelshæfteopbevaringsreolsproduktionsfacilitet. Of course, it is not used often. It pertains to a production warehouse for multiplication tables.

The Swedish language has realisationsvinstbeskattning as one of its longer words but happens to be used as well on a regular basis. It is just 28 letters and means “capital gains tax”. Going further, Swedish people can coin words of the Tower of Babel proportion like Spårvagnsaktiebolagsskensmutsskjutarefackföreningspersonalbeklädnadsmagasinsförrådsförvaltarens. It is unsure though how this 95-letter contraption of a word can be pronounced correctly. Its definition is as long as the word too a supervisor of the repository of uniforms of the union of cleaners of the tramway company.

There are not less than 64 letters in this longest Icelandic single word. The meaning is “Key ring of the key chain of the outer door to the storage tool shed of the road workers on the Vaðlaheiði plateau” in modern English.

This list of highly unusual long Scandinavian words can take up a lot of space in this blog. Russian, French, Norman, Greek, German language, Northern England words have inflected noun in correct form. There are Sanskrit letters with proper nouns, words in opera that very long letter words. These single-letter words are the longest word with citation needed that has ever existed.  It can be very hard to read through them, and even more difficult when they are pronounced; really hard when we talk about Scandinavian translation. American, Atlantic, Sweden, Russian, Hebrew, also have single letter word which are the longest word in old English ever existed.  What a fun way though to explore and discover such interesting longest words with citation needed with case folder,  many of us thought only existed in fiction books or magic spells. It also accesses rights in the church of England words and Viking words. What beauty our languages have indeed!

Scandinavian longest words can trouble a lot of people, especially if they are a new learner of Scandinavian languages. These words are complex, Viking times mostly unrelated and archaic. But still, if you find them in a history book or a text, you don’t have to struggle anymore, you can still access their meaning on the internet or through their relevant dictionaries. Some places have a privacy policy of their longest word.

What you can’t do is translate your important documents into another language. And for that, we assure you that you have nothing to worry about as well. At Nordic Trans, we are here to provide translation for all Nordic languages. Our expert translators are the ones that can take care of every translation requirement that you have. Our native translators are available at your service and you can get in touch with us through our online live chat service at any time. American, slovak, hebrew, Vietnam all have impulse control deficiency longest words with access rights. Quartz, Amazin, Kurtz all have the longest word in their language. You can discuss your project with our project managers and they will assign your translation to the relevant translators in no time.

What is the longest Norwegian word?

The most confusing thing about the Norwegian language is the made-up, or compound words. So, when there was a radio competition to create the longest word possible, Norwegians came up with ‘Dampskipsundervannsstyrkeprøvemaskinerikonstruksjonsvanskeligheter’. It can be translated to something like ‘underwater steamship strength test machinery building difficulties.’

Norwegians love combining words to make up new ones. It can be very confusing for not only outsiders but even for the native speakers. If someone doesn’t know the context, they will have trouble understanding the meaning of a word. On top of that, the words of Norwegian are also pretty difficult to pronounce.

What is the longest Swedish word?

Swedish language is very flexible, which means creating new words is something that is done frequently by its speakers. The longest Swedish word, according to the Guinness Book of Records is  ‘Nordösterssjökustartilleriflygspaningssimulatoranläggningsmaterielunderhållsuppföljningssystemdiskussionsinläggningsförberedelsearbeten’ and translates to “Coast artillery flight searching simulator area material maintaining follow-up system discussion preparation tasks of the Northern Baltic Sea”. Swedish also has a difficult pronunciation system, but it is still being studied by millions of people around the world. The influx of immigrants to Sweden has made the Swedish language quite popular.

What are the 10 longest words?

There are long words that we hear in pop culture and then the ones that appear in the dictionaries. Some of them are quite difficult to pronounce, which is why they seem even scarier. Here are the 10 longest words:

What’s another word for Scandinavian?

Scandinavia is a subregion in Europe. The kingdoms of Norway, Denmark, and Sweden are located in Scandinavia. They share a common culture. Their languages are also mutually intelligible. People often confuse Scandinavian countries with Nordic countries. The latter also includes Iceland, Greenland, and the Faroe Island, as well as the Scandinavian countries. Nordic is not another term for Scandinavian. But the people of Scandinavia can be referred to as Swedish, Dane, or Norwegian, depending on their country of origin. They are also sometimes referred to as Vikings and Norse because they are the direct descendants of the Norse men. They can also be called the Germanic people. However, there is still a lot that we don’t know about the history of the Germanic people.