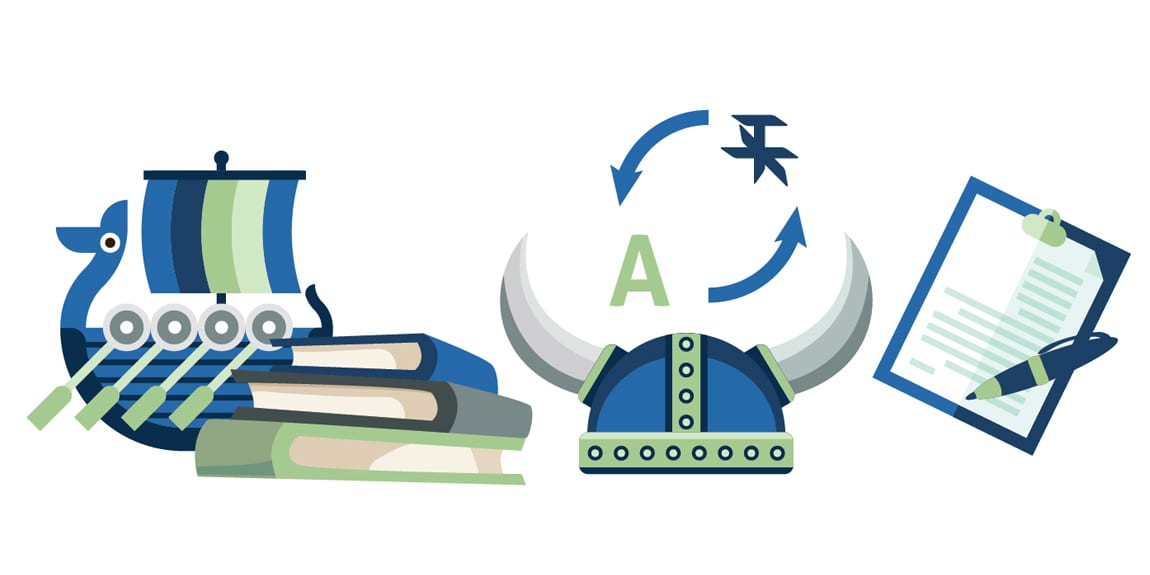 The term Vikings, in its modern English context, is commonly associated with the Norse communities during the era known as the Viking Age. During this era, military, trade, and human demographic expansion around the Scandinavian region flourished. These massive expansion of both trade and culture plays an important role in the development of various early settlements in Scandinavia, France, Britain, and even as far as Italy.

The Vikings were considered Norsemen, which is of Germanic origin. They spoke a unique language called Old Norse. They are also famous for their seafaring skills. In fact, many historians believe that they are some of the earliest people to visit the British Isles, Canada, the United States, and some parts of South America. These peoples advanced seafaring and navigational skills are characterized by their famed longships.

While these traits and advanced seafaring skills are some of the highlights that made the Vikings famous, it is also their unique language that made them an important group in the history of mankind. The Viking language, or Old Norse as it would be eventually known, is considered the oldest of all Germanic languages. It traces its roots from a number of Indo-European mother language, which means that it has influences from Europe and even as far as India.

The earliest known usage of this Old Norse dates back to as far as 1200B.C. During this point, the language is only used by a handful of Viking tribes. The spread of the language did not start until the 8th century when Vikings started to explore eastwards.

People in the Scandinavian region use a unique Nordic dialect which many historians believe could be the origin of the Viking language. They called this Proto Norse. The origin of this language is widely associated with Norway. However, Proto Norse did not undergo major changes up until around 500 to 800 A.D. During this time, the “Umlaut” was introduced into the dialect which would later kick-off huge changes and its evolution.

The second major change came with the introduction of diphthongs into the language. While Vikings are generally recognized as a single group of people, it is composed of several tribes. Each of these tribes can have their own unique pronunciations. However, the introduction of diphthongs made communications easier as there is one commonalities when it comes to pronunciation. Although there are no written evidence of this, historians theorize that most people using the Proto Norse could easily converse and understand each other. This means that a Viking from Norway can easily converse with someone from Iceland.

The alphabet is called Futhark, with an older version called Elder Futhark. The Elder Futhark alphabet has 24 runes and was used from 200 A.D. to 800 A.D. based on estimates. Each of this unique runes had its corresponding consonant. On the other hand, the newer Futhark has a simpler form with only 16 runes. The newer alphabet is estimated to have been used from 800 A.D.

The Old Norse As We Know It

If there is one particular event in history that ushered the age of Vikings, that would be the raid of 793 A.D. when they stormed and raided the Monastery of Lindisfarne. This event started the Viking conquest eastwards. Centuries later, they will move westwards bringing with them their language. Historians agree that while this is not the definitive cause of the spread of Germanic languages around Europe, it certainly aided in spreading it.

At its height, Old Norse is spoken from the Baltic Sea in the East to Greenland in the West. It is also widely believed that despite huge territorial differences, the language spoken in these regions are pretty much the same. By the 11th century, at the height of the Viking age, Old Norse is most widely used language in all of Europe.

The influence of the Vikings would later spread across many region. It is spoken in a number of settlements in the British Isles, including the Isle of Mann and Wales. It influence even reached a far as Russia and Vinland, the Viking’s name for modern day United States.

Old Norse is considered to be around 3000 years old. It is the oldest and most influential of all dialects that are part of the Indo-European root. Due to the vast area controlled by the Vikings at the height of their power, a number of mutations and variations from different regions eventually appeared. Nevertheless, since they all mutated from the same mother language, it is theorized that people can still communicate without any language barriers. This means that the Old Norse spoken in Normandy, may have slight deviation from that spoken in the Netherlands. However, people from the two different regions will have no problem communicating with each other.